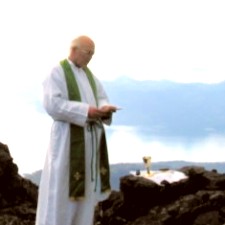 Father Pablo, you were born in Italy. When did you leave your native land to go in mission? Which countries have you lived in and in which country are you currently living in?

I left Italy on the 28th of December 1972 by ship on one of the last trips made by the  Augustus liner and I landed in Buenos Aires on the 13th January 1973. I spent 12 years in Uruguay, 13 years in Chile and the rest of my time in Argentina.

When and how did your friendship with the Belltron start?

In 1998 I was sent to Easter Island  for two months to replace the pastor. Before leaving for the "continent" (as they call it over there when they go to Santiago), the parish priest taught me how to use the Belltron electronic bell system, but ... I knew very little about  programming the bell system and almost every week I had to call the technician in Santiago to ask him to guide me in programming melodies which were not part of the standard programming inside the machine.

I saw the label on the electronic bell system and looked Belltron up on the Internet and also found their e-mail address. So I wrote to the company with my queries  and I immediately received a reply from Mr.  Filippo Vallesi, one of the founders of Belltron. He was kind enough to give me all the necessary information and sent me the user manual over the Internet too.

That’s how I met Filippo, the man with a volcano full of ideas. I took a photo of the omnidirectional speaker which is installed on the roof of the church and sent it to him.  Very soon after this I saw this picture on Belltron’s web site as not many companies have one of their pieces of equipment installed on an island as far away as Easter Island!

After this initial approach and the purchasing of a Belltron product, how did you maintain contact with them?

I return to Italy every three years, and always go to visit Filippo and the factory during my stay. Since I like to "play around" a lot with electronic equipment and have realized audio systems in churches, cathedrals and shrines, I gave them some suggestions regarding products being sent to South America. Over here everyone tends to play around with the settings of the amplifiers as hardly any churches have a Sacristan. Therefore, catechists, guitarists, singers, etc. are free to adjust the volumes on the systems. Luckily, a few years ago Belltron decided to avoid this problem by removing the knobs subject to tampering and allow for keyboard locking of the system.

What are the reasons that have led you to always choose a product with the Belltron trademark for your parishes?

A part from the quality, the opportunity to have direct and fast expert advice always at hand. I have installed an audio system in a church in Tahiti, French Polynesia, and I had a minor inconvenience with the system. Well, in less than an hour the problem was resolved by direct assistance from Belltron in Italy.

Have you made any unusual requests to Belltron over the past years?

Well, the only thing a bit unexpected was a power issue with the receiver of the amplifier’s remote control. It had   blown a diode, the surface contact type and I was lost in the middle of the jungle at that time and not able to find  a diode to solder to the system. Filippo very kindly sent me a photo of the circuit board and advised me to replace the faulty diode with a micro normal one even though it was extremely over size compared to the original one. What a funny sight to see a 1 cm. diode in the middle of resistors, capacitors and small diodes. The strange thing was though.... that it worked!

In your opinion, how important is a good sound system and music in liturgical celebrations?

Perhaps the question is a bit 'rhetoric! But, it’s useless for priests to prepare sermons or for readers to read if people cannot hear what they are saying.  I remember saying to the rector after having carried out  the installation of a sound system in the sanctuary of Santiago, Chile, "Now your sermon needs to be prepared carefully because people can finally here what you are saying.

Have there been situations where the congregation  or priests have complimented you on the sound system and / or bell playing using the Belltron products? If so, in which occasion?

I have received quite a lot of  credit for the Belltron audio systems. There were churches that had tried almost everything to resolve their audio issues and finally, with the equipment made by Belltron their problems were resolved.
In particular, I remember the satisfaction of the rector of the Cathedral of Coyhaique and Puereto Aysén, Chile. The Rector of the cathedral had even contacted some technicians of the Catholic University of Concepción who worked in acoustic studies but the results were not very "technical" at all. Their intervention revealed a relatively high resonance in the buildings and they suggested amplifiers, speakers and microphones that you could be bought in any general audio equipment store. The quotation was rather "expensive" too. Then they contacted me for some consultations and  I suggested the Belltron products as a solution because they manufacture  equipment specially designed for good vocal sounds which are so important in churches. Even the costs were much lower. So they bought the equipment and it functioned to their complete satisfaction.